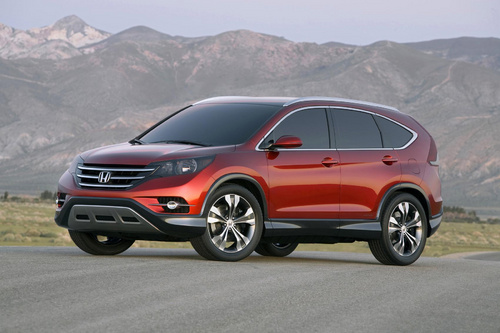 Honda has released an image of the new CR-V Concept, providing the first official glimpse of styling direction. The all-new, fourth-generation CR-V is set to go on sale in the United States by the end of 2011, and in Europe in Autumn 2012.

The new CR-V Concept embraces a distinctive and bold styling direction. Compared to the previous generation, the concept model takes on a more aggressive stance with deeper sculpting of the body lines and a bolder front fascia. The lower front bumper wraps smartly upward to convey SUV capability, while the overall lower front bumper design now integrates more smoothly into the fascia for improved aerodynamics.

The CR-V's vertical taillights remain for the next model with a more three-dimensional style that wraps further into the design of the vehicle.

Equipped with more efficient engines compared to the current model, the new CR-V is expected to deliver improved fuel economy.

The CR-V is one of the top-selling SUVs, sold in more than 160 countries throughout Europe, Asia, North America, South America and Africa.

The new CR-V Concept will be on first public display at the Orange County International Auto Show in Anaheim, California, in September 2011.