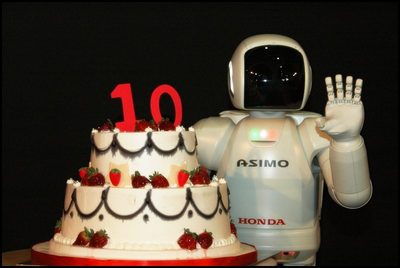 ASIMO reached a huge milestone and celebrated its 10th Anniversary on 31st October. A decade ago, Honda created a humanoid robot so advanced it started a revolution in humanoid robot technology. To mark this date, dedicated Anniversary websites and films have been launched today, with new photos, videos, the story of its creation and smartphone apps.

Honda's research into humanoid robotics started almost a quarter of a century ago and 14 years later, on 31st October 2000, ASIMO was created. Since its European unveiling at the Technical University of Darmstadt in June 2003, ASIMO has inspired, educated and influenced thousands of people all over the region and has gained acclaim from engineers and scientists alike.

More information can be found at http://world.honda.com/ASIMO/.