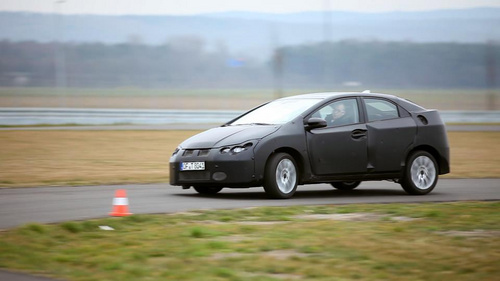 A new Honda Civic that's more confident, clever and versatile makes its debut at the Frankfurt Motor Show in September.

The ninth generation Civic hatchback will offer stand-out looks combined with class-leading space for passengers and luggage - and will continue to deliver peace of mind with low running costs, through Honda's famed and unparalleled reliability.

Quality and comfort levels have improved dramatically over the outgoing model.

Honda's new small family car has been designed exclusively for Europe and has been extensively tested on the region's roads. It goes on sale during 2012.

Honda engineers concentrated a huge amount of time and effort improving ride quality and handling of the Civic, and through significant changes to the suspension set-up they have enhanced both comfort and body control.

To give customers the biggest cabin and boot space in the C-sector, the Civic retains a rear torsion beam suspension system - but the latest set-up uses clever fluid-filled compliance bushes to improve overall ride performance and handling. It has also been strengthened to give better stability, particularly at high speeds.

The first of five films on the development of the new Civic features Honda engineers discussing the improvements made to ride and handling. The video can be viewed at http://www.honda.co.uk/newcivic.