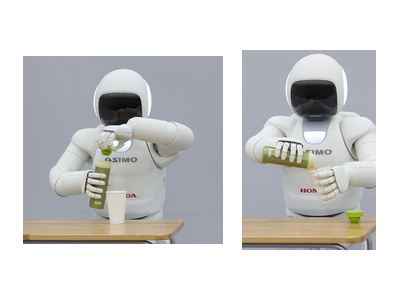 Honda has unveiled an all-new ASIMO humanoid robot with a world-first technology allowing ASIMO to move without being controlled by an operator. With significantly improved intelligence and the physical ability to adapt to situations, ASIMO has taken another step closer to practical use in an office or public space.

Honda has also introduced a new task-performing robot arm. This experimental model was developed while applying multi-joint and posture control technologies to ASIMO. This robot arm can be controlled remotely to perform tasks in places which are difficult for people to access.

To represent all of Honda's robotic technologies and products such as ASIMO, Honda has established the new collective name 'Honda Robotics'. Under this name Honda will continue the development and research of humanoid robots and will also focus on applying the robotic technologies to mass-produced products and putting them into practical use.

The all-new ASIMO has taken a step forward from being an 'automatic machine' to an 'autonomous machine'. It now has the ability to make decisions based on its surroundings and the movements of people.

At the beginning of the development process, the following three factors were identified as necessary for a robot to perform as an autonomous machine:

Once these had been identified Honda went about developing the technologies required to make them possible.

Honda has developed a new system that is key for advanced intelligence. The new system continuously evaluates the input from multiple sensors, predicts the situation and then determines the behaviour of the robot. With this technology ASIMO is now capable of responding to the movement of people and the surrounding situations.

For instance, ASIMO can now predict the direction a person will walk and quickly determine an alternative path to take if a collision is detected. This technology also enables ASIMO to recognise faces and voices.

The combination of strengthened legs, an expanded range of leg movement and a newly developed control technology enables ASIMO to change landing positions mid-movement. This new agility also gives ASIMO the flexibility to adapt to changing situations so that it can walk on uneven surfaces. 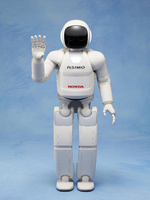 Honda has developed a highly functional compact multi-fingered hand, which has a tactile sensor and a force sensor embedded on the palm and in each finger. Combined with the object recognition technology, this multi-fingered hand enables the all-new ASIMO to perform tasks with dexterity, such as picking up a glass bottle and twisting off the cap, or holding a soft paper cup without squashing it. Moreover, ASIMO is now capable of making sign language expressions which require the complex movement of fingers.

Technologies developed for ASIMO were applied to an experimental model of a task-performing robot arm. The robot arm moves on a self-propelled base and was designed with the idea of being utilised at disaster sites or other places too dangerous for people to work.

The stability control technology used for ASIMO's walking and running were applied to stabilise the end of the arm even on unstable surfaces. The application of other ASIMO technologies such as the multi-joint control technology that controls as many as 57 motors embedded in the joints of the arms and legs, has enabled the robot arm to approach an object and perform necessary tasks even in a narrow space with unstable footing and many obstacles.