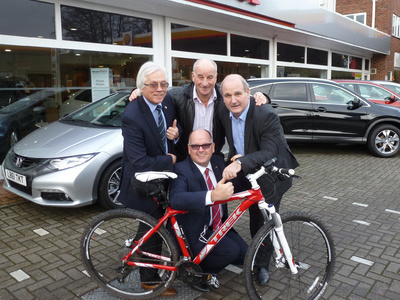 The Woking Bikeathon, sponsored by Trident Honda, is being held on Sunday 12th May, 2013, with two routes both starting and finishing at Bishop David Brown School, Sheerwater.

Both routes go through New Haw and Chertsey, they then split with the longer route going through Egham, Chobham and Horsell, the short route returning to Woking via Ottershaw.

Monies raised from this event will go to the Woking and Sam Beare Hospices, The White Lodge Centre, Leukaemia and Lymphoma Research, The Children's Society, Woking Community First Responders and other Rotary Club of Woking charities.

Children may take part but must be accompanied by two adults.