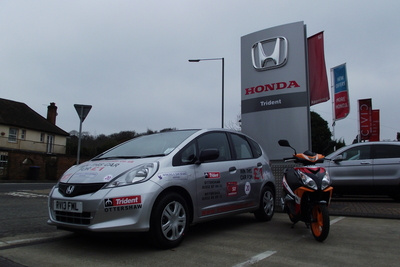 Trident Honda is delighted to announce that the Woking & Sam Beare Hospice Raffle starts again this Saturday; the launch will be in the Peacocks Centre in Woking, outside H&M, at 10.00am on Saturday 23rd March.

Trident Honda, who have sponsored the car raffle many times - from the launch in the 1990's with Minis - are delighted to once again support such a worthy cause.

It is hoped that the Honda scooter, a Honda NCS50R in the Honda Repsol racing colours, will encourage the younger1 audience to dig deep for their £1 to help support the hospices.

The scooter may currently be viewed in Trident Honda's Ottershaw showroom.