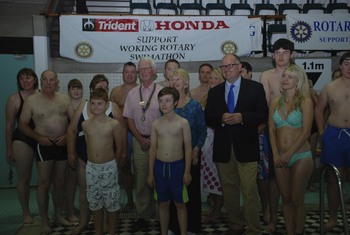 We realise that some months has passed since the 6th Woking Rotary Swimathon on Sunday 13 October 2013, without our having published details.

More than 270 people took part, with 48 teams of up to six, sponsored by family and friends to swim for 55 minutes each hour between 9am and 7pm at the Pool in the Park with the aim to raise up to £9000 for local charities. Each swimmer averaged between 10 and 20 lengths.

The annual event was started by the Mayor of Woking, Anne Roberts, and attended by Richard Roberts, Managing Director of Trident Honda who again sponsored this year's Swimathon. More than 35 volunteers helped out during the day.

The past five Swimathon have raised more than £75,000 and money raised this year will be donated to a number of local charities including Woking Shopmobility; Tommy D project supporting young people aged between 14 and 18 who have lost someone close to them; York Road Project providing accommodation and support to those facing homelessness; Let's Read that promotes and develops literacy skills amongst young people; Age Concern to promote relief of elderly people in Woking; and The Friends of Woking Community Hospital - a voluntary support group to improve hospital facilities and equipment.

Trident Honda is delighted to be sponsoring this event for the 6th year running, an event which raises money for the local community whilst delivering fun and a challenge for all the entrants. Great also to see the 2 teams from Trident Honda break their previous number of lengths achieved, a Trident Honda record of 130 lengths.