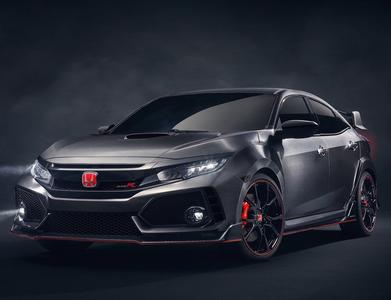 Raw power from a refined yet high revving 2.0-litre VTEC TURBO engine will trigger all your senses. It's the most extreme, high-performance engine for a Type R.

The Type R benefits from three new driving modes: 'Comfort', 'Sport' and a track-focused '+R' mode. They allow you to adapt the Type R's response to different surfaces and conditions - whether on the road or the racetrack.

The Civic Type R is the most powerful front wheel drive hot hatch in the world.

Watch the hottest lap ever for a front-wheel drive car at the Nurburgring:

The new Civic Type R is based on the 2017 Honda Civic, which brings with it too many improvements to list here, but some key improvements are:

Are you feeling it? If you like the sound of the Type R's blistering performance, wait till you see it.

New from the ground up, the 2017 Type R is a charismatic hot hatch with muscular, athletic body styling. A more aggressive stance with enhanced aerodynamics delivers a thrilling and engaging driving experience. The wide wheel arches hug the imposing and impressive 20" alloys. Under the track-honed exterior is a new suspension design for confident, sure-footed handling.

There are two Type R models - the standard Type R and the Type R GT.

So away from the all-wheel-drive, all-weather mega-hatches, the Honda Civic Type R remains alone, with a fundamentally appealing character unlike anyone else's hottest hatchbacks. And there's quite a lot to like about that.

One of the best hot hatchbacks in its class? Undoubtedly.

But the great thing about it is that you can hoon to your heart's content in this car and the ease off, slow it down, go back into Comfort Mode, and take the kids to school, or go shopping, or go to work. That's the beauty of a hot hatchback isn't it, that you can have your cake and eat it. You can have the Nurburgring lap time record holder and still use it as a daily driver.

We're going to stick our bits on the block and name this the new hot hatch king.

The beauty of a great hot hatch is its dual personality. The ability to comfortably do humdrum day-to-day stuff but deliver a completely addictive drive when the mood takes you. The new Civic Type R now ticks both those boxes and feels far more grown up than its looks would suggest. Honda has addressed the Type R's biggest flaws by making it more comfortable, refined and easier to live with while still providing access to its wild and rapid character when you want it.

And when it comes to simply being a hatchback, the Type R is up there with the best. It's enormously practical, with a 420-litre boot, space for two adults in the rear and a supple ride, which means using it everyday is entirely conceivable prospect.

I'm very happy to report that the FK8 Type R has no obvious flaws that I can think of. It now rides brilliantly, is perfectly comfortable over long distances, looks wicked (I know I'm in a minority here) and is a car you can use as a daily driver and as a track car that will embarrass almost anything you put in its path.

The new Civic Type R is a huge step on from the previous car, mixing surprising refinement with genuine interaction and scintillating pace.

What to make of the new Type R? In a word - it's brilliant

Throughout the Civic Type R there’s a recurring theme of precision. There’s something almost clinical about the way it dissects a good road, covering ground at a rate we simply wouldn’t have thought possible for a front-wheel drive hot hatch a few years ago. At the same time, improvements to the ride, interior quality and acoustics have all succeeded in broadening out the car’s appeal. It remains a relatively hardcore choice, but one that’s now far more accessible.