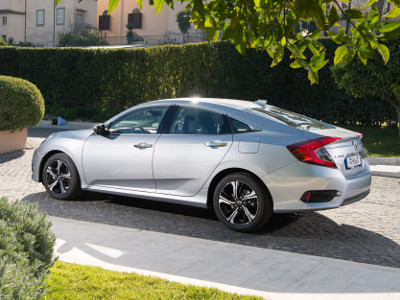 Honda UK has announced the four door saloon version of the Civic is coming to the UK market. The Civic saloon will be available in both petrol and diesel powertrains and will be in showrooms from August.

Wider, longer, and lower than any of its predecessors, the all-new Civic saloon has a short front overhang and taut lines that reference the strong aerodynamic efficiency. A sharp and aggressive 'face', pronounced wheel-arches hint at the saloon's sporting character.

The petrol version will be the 1.0 i-VTEC available on the Civic hatchback since launch and comes with either the CVT or manual transmission. The 1.6 i-DTEC diesel powertrain was launched earlier this year in the hatchback and will be available with the same manual transmission or a new nine-speed automatic.

Similar to the hatchback, the new wider, longer platform results in class-leading interior space. The interior features a simple, uncluttered layout and exceptional refinement. The seating position is again lower to give the driver a greater feeling of connection with the car, and the new saloon combines unrivalled passenger and luggage space with versatile, practical usability.

Building on the 40-year heritage of the Civic name, and similar to the hatchback, the four door saloon has been engineered from the ground up and represents a significant step forward for Honda in the C-segment, benefiting from the largest single model global development programme in the company's history.

The Civic is a core model for Honda in Europe and has been at the heart of the brand's strong sales and manufacturing heritage, with the hatchback built in Swindon. The arrival of the saloon to the UK market compliments the Civic family and will be a great addition to our showrooms alongside what is already a very successful range for Honda.

Details on pricing, specification, grades and fuel efficiency will be announced closer to launch.

In the meantime, why not see the amazing offers currently available on the Civic Hatchback: