It's back - Meaner, Louder and Faster #MeanMower 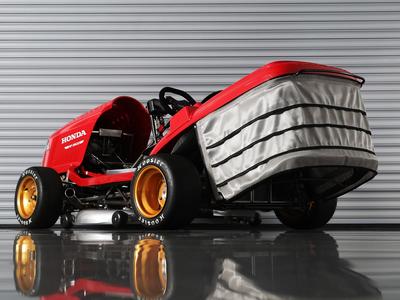 Honda (UK) is out to reclaim the crown for the world's fastest lawn mower with Mean Mower V2 and a target speed of 150mph in its sights. Powered by a 999cc four-cylinder unit from Honda's Fireblade SP motorcycle.

Built by Team Dynamics, Honda's British Touring Car Championship partner and the team behind the original Mean Mower that took the record for the world's fastest lawn mower in 2014, development has moved on to a whole new level. Now using CAD design, more bespoke parts, advanced materials, and 3D printing, it now packs almost double the power of the original, with the development team estimating it is capable of speeds in excess of 150mph.

The original Mean Mower was a great challenge for us and the result was an amazing machine. This time we have moved the game on considerably to build an incredible piece of real engineering, using advanced design and production techniques and calling upon some very clever thinking to bring the performance and power but still retain the look of the production mower. We're in testing phase now and everything is looking good, with a top speed of more than 150mph very much in our sights.

Yes it can cut grass…

A key part of the brief was to retain the look of a lawn mower - in this case the Honda HF 2622 lawn tractor- which it does by carrying over its front cowl, grass box and body panels. The second essential element is the ability to still cut grass, which it also still does, thanks to slight revisions to the cutter deck to house the chain running to the rear tyres and the two batteries required to power electric motors which spin carbon fibre blades to mow.

The Fireblade DNA continues with the carry-over of several other parts including clutch, ECU, six-speed drive train and full colour LCD display. The programmable quick shift gear system promises precise and responsive shift through carbon paddles on the steering wheel - with the team estimating that this new machine could reach 90mph in first gear.

The majority of Mean Mower V2 has been bespoke designed and manufactured, with the chassis made from T45 steel rather than chromoly for durability and flexibility - vital given that it has no suspension. What to do if the airbox won't fit under the cowl because the injectors are in the way? 3D print an airbox to fit, of course!

The all-important matter of braking is covered off by Kelgate - four-piston callipers to the front and six to the rear - vented to increase airflow and reduce weight. Goldspeed ten-inch ATV wheels anodised in gold match that of the Fireblade, with special-order Hoosier racing tyres giving the grip.

With all of this incredible refined raw power, a professional racer is the only choice to tame Mean Mower V2. Enter Jess Hawkins, an experienced kart and car racer. At just 23, Jess is currently performing as a stunt driver in the touring Fast & Furious Live show.

The original Mean Mower was launched in 2013, aiming to highlight the breadth of Honda's product offering, sporty credentials and reputation as one of the world's most innovative companies. It went on to become the world's fastest lawnmower when it hit an incredible 116.575mph, at the IDIADA Proving Ground, a record which has since been surpassed.

Watch the machine in action for the first time here: