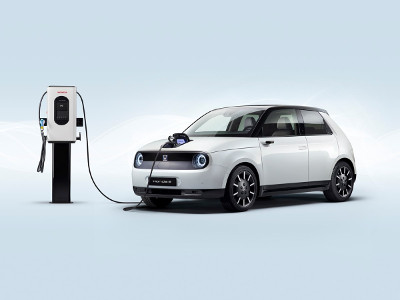 Honda is further accelerating its electrification plans for Europe by moving forward its goal for all of its European mainstream models to feature electrified powertrains by 2022. The bold new target announced during an 'Electric Vision' event in Amsterdam, is three years ahead of the previously announced 2025 goal, demonstrating the confidence Honda has in its electric and hybrid powertrain technology.

This acceleration will see 6 electrified models launched over the next 36 months, with the Honda e and new hybrid-only Jazz leading the way.

The pace of change in regulation, the market, and consumer behaviour in Europe means that the shift towards electrification is happening faster here than anywhere else in the world. As the pace of change continues to accelerate, we need to act sooner to meet these challenges head-on. I'm delighted to announce that all of Honda's mainstream models here in Europe will be electrified not by 2025, but three years earlier, by the end of 2022,just 36 months from now.

Honda also revealed its new 'e: Technology' branding, which will unify all electrified products from across the business under the same global name.

For automobiles, as well as signifying the environmentally-friendly credentials of the product, the badging will denote the type of powertrain; Jazz will be the first vehicle to carry the e:HEV branding, standing for Hybrid Electric Vehicle.

The advanced two-motor hybrid technology that will power the all-new Jazz hatchback has already met with widespread acclaim across Europe for delivering high-levels of real-world efficiency and refinement in the 2019 CR-V Hybrid.

Unlike traditional hybrids, where the electric motor assists the engine, in Jazz e:HEV the engine produces electricity which assists the motor. The result is the smooth ride and crisp acceleration of an electric vehicle matched to Honda's unique control technology offering outstanding environmental performance without compromising driver enjoyment.

The next-generation Jazz will be available in 2020 and has made its global premiere at the 2019 Tokyo Motor Show.

Honda have also confirmed how it will reach this ambition. Including the all-new Jazz and Honda e, six electrified models will be launched for the European market in the next 36 months. This includes a further battery electric vehicle and a range of e:HEV equipped models.

This shift to electrification will change the face of our model line-up considerably. Our two-motor hybrid technology will be spread across the model range and we will bring further battery electric product to the market.

Away from announcements about its automobile range, Honda also revealed the next step in its energy management business for Europe by announcing a collaboration with Vattenfall, a leading European energy supplier.

This collaboration will allow Honda to provide the world's first flexible energy contract specifically tailored for electric vehicle (EV) owners in Europe. The partnership marks a key milestone for Honda in the development of the energy management solutions business that represents an important pillar of its 'Electric Vision' strategy in Europe.

In a Letter of Intent, signed on 23 October 2019, the two companies confirmed their intentions to jointly develop and market a flexible energy contract that will allow EVs to be charged at the most cost-effective times, relative to grid demand. The tariffs - available to owners of any brand of electric vehicle1 - also promote the use of electricity generated through renewable sources including hydropower and wind farms, realising Honda's vision for sustainable future energy supply. This service will initially be launched in the UK and Germany in 2020, with other European countries to follow.

Vattenfall will also oversee the installation of Honda Power Charger domestic charge points, through preferred contractors in both the UK and Germany. The system consists of a charging unit that can be wall or pedestal mounted, with a maximum output of 7.4kW (single phase power supply) or 22kW (three-phase power supply). At 22kW, Honda e owners will be able to charge to 100% capacity in 4.1 hours, assuming a 32-amp supply, significantly faster than through a standard wall socket.

This key strategic partnership is the next step in Honda's Energy Management Business in Europe which will ultimately proliferate the use of domestic power chargers, urban charging solutions, commercial energy services and advanced vehicle to grid (V2G) technology.

Vattenfall is a Swedish energy company, fully owned by the Swedish state. Main markets are Sweden, Germany, the Netherlands, Denmark and the UK. Vattenfall is one of Europe's leading producers of renewable energy and the company wants to enable a fossil free life within one generation. Vattenfall operates numerous hydro-, wind- and solar power plants, including one of the world's largest offshore wind farms, Thanet, UK.