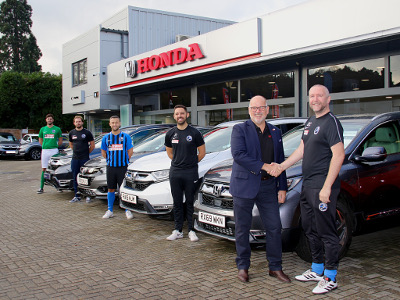 Based at Waterers Park in Knaphill, Knaphill Athletic Football Club had been sponsored by Trident Honda since it was formed in 2010.

We're delighted to have the support and generosity of Trident Honda. The sponsorship covers home and away kits for both the men's first team and reserves, management kit, player warm-up tops and equipment such as training balls.

It is always a joy to support Knaphill Athletic, it is impossible not to get caught up in the enthusiasm at the club, which goes a long way to explain my club presidency!

Based at Waterers Park in Knaphill, Knaphill Athletic Football Club was formed in 2010 by the former committee and members of Surrey Athletic and Knaphill FC A & B Teams, to provide participation football at all levels throughout the intermediate and junior levels of adult football. In 2014, after much hard work off the pitch, the club were awarded FA Charter Standard Community Club status recognising our achievements in providing a safe and competitive football environment for local youths.