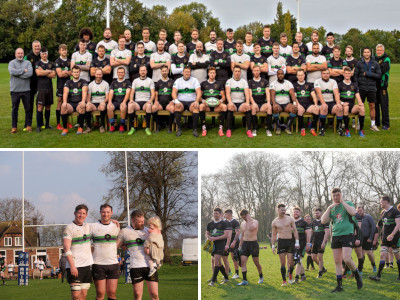 Vandals RFC are delighted to announce the sponsorship agreement with Trident Honda and are incredibly grateful for such amazing support for the 2020-2021 season. The partnership between Vandals RFC and Trident Honda spans 15 years with the first sponsorship deal being a match day booklet advert. The club will now proudly feature Trident Honda's logo outside the Club House and on the club website.

'The Vandals' can be traced back to the London School of Economics in the early 1930's, when Frederick Monkhouse and John Scurr, both forwards in the college first team, issued an invitation addressed to all 'rugger' men throughout London University to attend a meeting at the Ship Tavern in Gate St, Holborn on 18 March 1932. The stated aim of the Club was to add to the athletic reputation of London University and to provide rugger teams for past students.

Initially playing on the University's excellent grounds at Motspur Park, the search for a suitable club ground ranged over the Home Counties, until two members happened upon a property which had been a private zoo, on a new island in the Thames made by the creation of the 'Desborough Cut'. Possessing excellent buildings suitable for conversion into changing rooms, space for three pitches and a pleasant house capable of providing a bar, tea and club room, as well as living quarters for the groundsman -- the property, known as Brownacres was ideal.

Vandals played friendly matches against neighbouring clubs, with occasional forays to London, the Home Counties, and abroad. On the formation of the RFU English League, the club were placed in Surrey League 1, before being promoted to London League 3 (SW) for the 1997/98 season.

The vandal of the Club's title is depicted on the Club's crest as a vulture about to take to the wing.

Weybridge Vandals is your local community rugby club, catering for all age groups from Mini rugby at Under 5, through to Junior rugby up to Under 19, and three senior sides, including a 1st team playing at a respectable level within the London South West 3 league, with good coverage of games in the local press, and a veterans' side for those that just don’t know when to hang up their boots!

The club is always pleased to see new faces, whether as players, spectators, or volunteers who would like to get involved with the Club in some way. For example you may be recently retired with some time on your hands, may have played rugby in some other part of the country, and would now like to put something back into the game. Whatever your interests -- you’ll be welcome at Vandals.