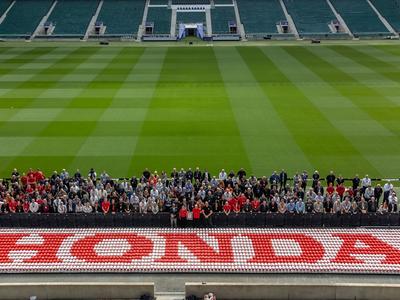 A total of 2,030 size-five rugby balls were used to create the mosaic, including 813 supporter-quality red balls and 1,217 training-quality white balls. The balls were supplied by Gilbert, the official supplier of the England Rugby.

Earlier this year, Honda announced a multi-year deal with the England Rugby Football Union. The Honda logo is now displayed across the England men's under-18s and under-20s playing and training kits, which is one of several new initiatives.

Honda is also making a commitment to grassroots games. The record-breaking rugby balls used to form the mosaic will be donated to grassroots rugby clubs across the UK, distributed by local Honda dealerships including Trident Honda.

The initiative is key to our goal of strengthening relationships with local community groups. At least 60 grassroots rugby clubs and their local communities will benefit from access to more high-quality sports equipment.