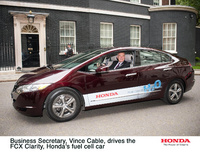 Honda's ground-breaking hydrogen fuel cell car, the FCX Clarity, has made its debut on UK roads, in the first of a series of high-profile test drives to raise awareness of the zero emission technology.

Business Secretary, Vince Cable, was one of the first to drive the world's only production fuel cell electric car following a Cabinet meeting at 10 Downing Street.

I was pleased to be one of the first in the UK to test drive the Honda FCX Clarity and find out more about the potential for hydrogen fuel cell technology. The Government is keen to encourage all forms of low carbon vehicle technology such as hydrogen fuel cells, hybrids or significantly more efficient conventional vehicles. This is part of our push to stimulate the market for green motoring and give consumers greater choice.

Honda has brought the FCX Clarity to the UK to inform and educate policy makers of the viability and potential of hydrogen fuel cell vehicles, which emit no pollutants, only water vapour from the exhaust.

Later this week, the FCX Clarity will be driven by other politicians, industry figures and key members of the media as Honda demonstrates the practicality, performance and range of the 5-door saloon to help encourage the development and adoption of hydrogen as a fuel in Europe.

Petrol-electric hybrids - like our Civic, Insight and CR-Z models - are currently an effective way to reduce emissions from cars, but fuel cell electric cars are the ultimate environmental technology, The FCX Clarity is a real world production vehicle that emits no harmful exhaust gasses, offers a range of around 270 miles, a short refuelling time, and the practicality and performance of a conventional saloon. It could revolutionise the future of motoring.

Honda is already leasing FCX Clarity vehicles in the US and Japan, where there are emerging infrastructures to support hydrogen-powered cars. There are no plans at present for the commercial introduction of the FCX Clarity in the UK.