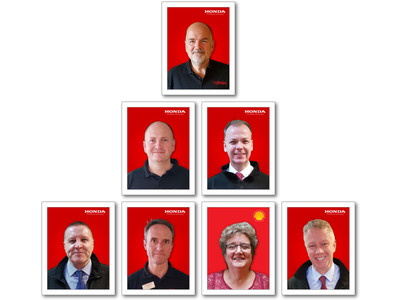 Established in 1963 by Michael Roberts, Trident Honda is today managed by his sons - Richard is our managing director, Christopher is our finance and IT director and James is our director of used car operations. The board of directors is greatly enhanced by the addition of Steve Henderson, an experienced director within the motor industry.

Richard started his career in the retail motor industry with a large Ford commercial dealership, dealing particularly with fleet and municipal sales. He joined Trident Honda in 1987 as a management trainee. During this period he worked in all departments of the Company, finally assisting the managing director with a number of special projects. He was appointed to the board as commercial director in 1991 and as managing director in 1996.

Richard undertook a course in Motor Industry Management, gaining the Edward Garnon Bequest Award from the Institute of the Motor Industry, presented by Prince Michael of Kent, for the best national project in 1990.

Trident Honda is at heart a family business - enthusiastic about the products we sell and passionate in our customer care.

Richard lives locally and is married with two daughters.

After 20 years with a successful dealer group and reaching the position of finance director, in 1997 Steve elected to join Trident Honda as general manager of our newly built Weybridge dealership. Steve wanted to return to the operational side of our industry and his enthusiasm and passion for high standards of customer care led to his appointment to the board as commercial director in 1999. In 2015, following our site merger, Steve joined Ottershaw as dealer principal.

Our goal at Trident Honda is to make the whole customer experience an exceptional one. We have grown the company on repeat business and personal recommendations which is a credit to the team of people we have here.

Steve lives in Surrey with his wife and daughters.

In 1995 Chris developed our website, making us one of the first UK dealers to have an Internet presence. In 2000 Motor Trader magazine gave us their first Digital Dealer Award.

Chris was appointed to the board as Finance Director in 2000.

Chris lives locally with his wife and two children.

After 2 years of selling Land Rover products, James joined Trident Honda in 1993 as a sales executive. James went on to become MG Brand Manager and oversaw MG sales at our Ottershaw and Weybridge branches.

In 2002, with Trident Honda's appointment as a Honda franchise dealer, James took on the role of group buyer overseeing the used car operation. James was appointed to the board of directors in September 2009.

James lives locally with his wife and daughter.

Colin joined the industry in 1977 at the age of 18 as a Sales Executive. Colin came to Trident Honda in 2004 having worked in senior positions within the industry working with various quality franchises. One of the key reason for joining Trident Honda, was to return to a family business where he could make a difference, having most recently worked for a large operation where this was difficult.

At Trident Honda I am able to make a difference

Colin is supported by his highly experienced Sales Team.

Chris joined Trident Honda in September 2009, with more than 20 years experience of Surrey's niche and prestige vehicle service markets. Chris ran the Weybridge aftersales team until the site's closure in April 2015, when he took the reins of our Ottershaw aftersales team from our previous aftersales manager, Terry Stickland, who retired in July 2015.

A real motoring enthusiast, he enjoys working for a Company that truly cares for its customers and where the staff have a shared passion to make it work.

Customers sometimes feel that having their car serviced or repaired is an unnecessary and expensive inconvenience. It's our job to show them otherwise, and to make the whole experience a seamless and efficient one. It's crucial to me that we create a warm and friendly environment, so they can really feel at home when dealing with us.

Chris is supported by a hugely experienced Service Team.

Mary started working at Trident Honda as a forecourt cashier in 1991, a friendly face to many a weary traveller at our busy petrol forecourt. Mary was promoted to Forecourt Manager in 2002, and has managed a stunning transformation in the department, with a huge improvement seen in the quality of our customer service, the cleanliness of our shop and in the quality of our stock. With so many forecourts closing, it is wonderful to see a well-managed and thriving forecourt.

Philip originally joined Trident Honda in 2015 to cover for the maternity leave of our accounts manager and helped to bring the accounts team up-to-date following the replacement of our dealer management system. Philip previously worked locally for a large accountancy practice, managing their accounts outsourcing team, as such Philip brings a wealth of accounts and management knowledge.