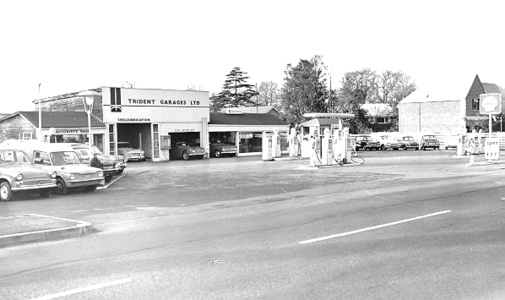 It happened also at this time that Ian Maybury, Valerie's stepfather, said he would be interested in funding a garage enterprise and I agreed to look for suitable businesses for sale.

I found Moore's Garage at Ottershaw and at Sheerwater and followed this up with site visits and meetings with Fred and Elsie Moore. The site in Ottershaw held more interest, with a busy forecourt selling 250,000 gallons a year (a lot in those days), and Triumph and Hillman dealerships. Fred was asking £40,000 and we didn't have enough money!

Our bank were totally disinterested in supporting me, but Fred Moore, with whom we had become quite friendly was keen for us to buy his business, despite having other interested parties, and offered to give us a loan of £20,000. Through Ian Maybury's accountant, 'Tommy' Tomsett, we went to see the manager of Barclays in Guildford High Street and without any pressure he agreed to give us a fluctuating overdraft of £10,000.

It was also agreed that Valerie's brother John Peirson Smith, a long term friend, should be an equal partner in the business.

So, at 7am on 1st July 1963 we met Fred on site at Ottershaw, dipped the tanks, checked stocks and started Trident Garages Ltd (the name was Valerie's brainchild). We had just four staff.

In the early 20 century the Ottershaw garage had been the Gardeners Arms public house. One of several pubs in Ottershaw village, serving no more than a few hundred inhabitants.

Around the 1930s petrol pumps were added and tea rooms, before being finally redeveloped as a garage, probably in the 1950s.

Fred Moore sold the Ottershaw garage to Trident Garages in 1963.